Stories of Survival From Previous Clients

Iowans are injured in accidents every day and don't know where to turn.  The Iowa injury attorneys at Walker, Billingsley & Bair provide the support and protection that is needed to deal with insurance companies and recover from your injuries.  Read about some of our stories of survival to learn more about how we assist injured Iowans every day.

Hardworking Father is Injured by a Drunk Driver

Take for example, Rod, one of our clients.  Rod is a hard-working father of two who was driving home from work.  As he went through a green light he was hit in the driver’s door by a drunk driver who ran the red light.  Not only was the driver drunk, but he did not have insurance and had been drinking at a local bar.  Rod sustained serious injuries requiring him to have several surgeries, and he was off work for almost 1 year.  Thankfully, for Rod, he had read Corey’s car insurance book and had bought enough insurance coverage to protect him and his family.  Also, it was good that he went to see Corey shortly after the crash.

Corey was able to find out where the drunk driver had been drinking and sent the bar a Dramshop notice within the 6-month deadline.  While Rod will live with daily pain and some permanent problems, he now has the financial security that he deserves for going through such a terrible crash.  Also, the bar that over served the driver has changed its policies and procedures so hopefully another family will not have to go through what Rod and his family have.

Jan was involved in what the insurance company called a “minor” fender bender when her car was struck in the rear.  The damage to her vehicle was about $2,000, but her car was drivable.  Because she did not have immediate pain, she did not go to the hospital.  When she woke up the next day she was very sore and had a headache so she went to see her family doctor.  Her doctor said that she should get better with physical therapy, but after a few months, she was not getting better.  Her doctor referred her for testing, which found that she had suffered a serious spinal injury.  She was sent to a specialist for an operation to repair her neck.  The operation cost thousands of dollars and Jan could not work for several months while she was recovering.  Even with the surgery, Jan’s neck will never be the same.

Since she did not go to the hospital immediately after the accident, she did not know if she would be able to make a claim for the pain and disability she was now experiencing.  The insurance company told her that they would only pay a small portion of her medical bills, plus a few hundred dollars for her pain and suffering injuries.  The insurance company went by the damage of her car, which was minimal at the time of the accident, yet Jan had suffered two herniated discs in her neck. Understandably, Jan began asking questions like:

Jan was seriously injured, scared and very confused. When Jan came to see us, she was at her wit’s end, ready to sign her rights away so she could at least get “something.”  The insurance company refused to accept that she was seriously injured from a so-called “low impact” injury.  Many “low impact” accidents do cause hidden injuries if the occupant is not expecting a sudden impact, like Jan.

Fortunately for Jan, she came to see us before signing her rights away to the insurance company or hiring an inexperienced attorney.  She could have easily taken this quick (and inadequate) settlement.  We were able to take the pressure off Jan while we took the insurance company to court to force them to live up to their legal “obligations.”  Most importantly, we sat down with Jan and explained what her rights were concerning the personal injuries she had suffered.  She never understood what was involved with the legal process until we told her that she had “rights,” including compensation for the pain and suffering she was experiencing from this accident.  We gathered Jan’s medical records together and over a period of several months of negotiations was able to obtain a fair and just settlement.  It took some time, but it was acceptable to Jan and us.  The bottom line is that the settlement was “right” and it was what Jan deserved. 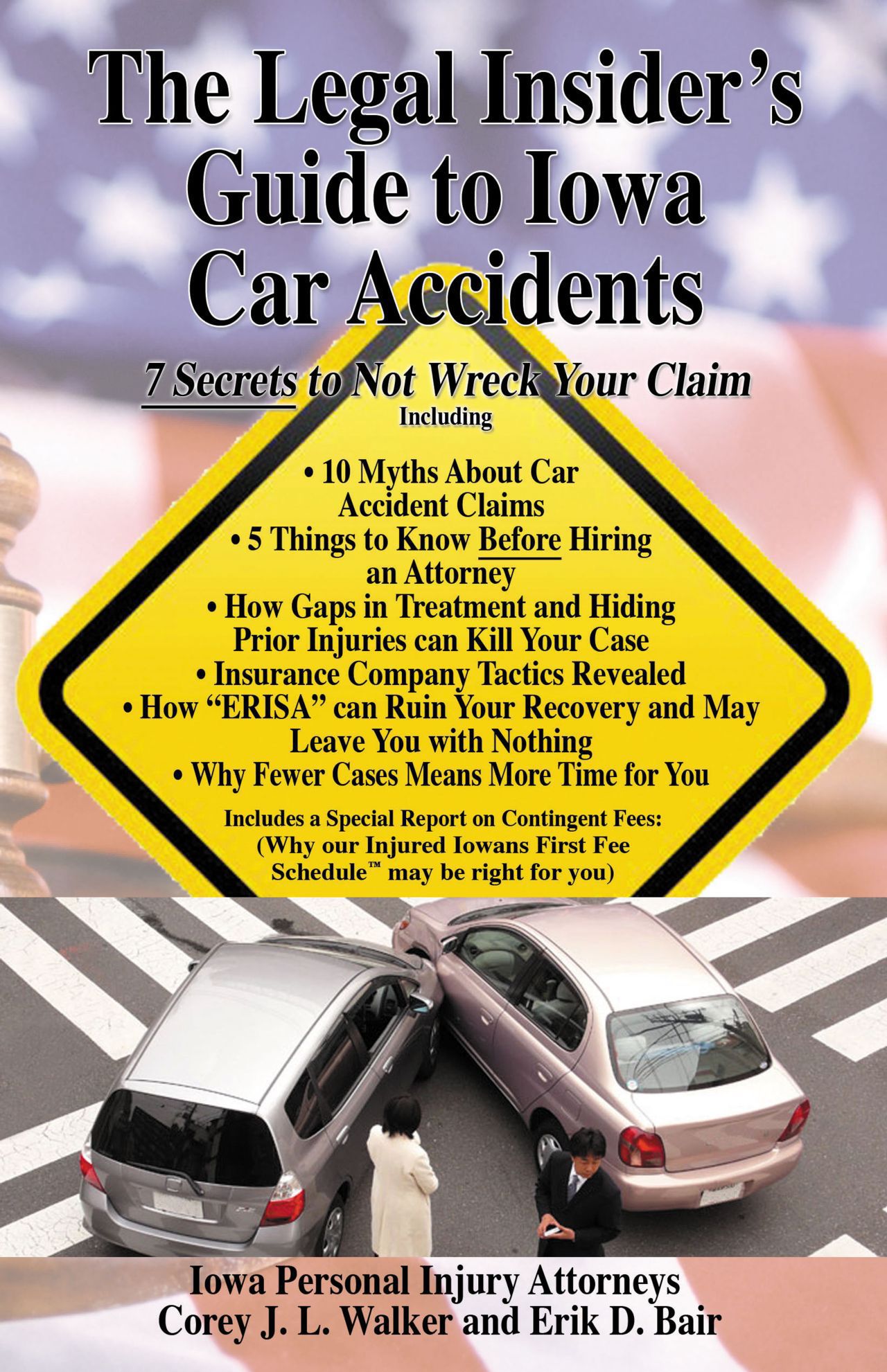 If you or a loved one has been injured in a car accident, we are here to help answer your questions.  Iowa Attorneys Corey J. L. Walker and Erik Bair practice primarily in personal injury law and offer a book about Iowa car accidents at no cost, risk or obligation.  The book is called “The Legal Insider’s Guide to Iowa Car Accidents- 7 Secrets to Not Wreck Your Case."  To order your copy go to click on the book or Call Now (641) 792-3595 (24 Hour Recorded Message).  We offer our Iowa car accident book at no cost because we have seen too many hard-working Iowans hurt in car accidents who made mistakes which cost them thousands of dollars.  Iowans hurt in car accidents are beginning to realize that the insurance company for the other driver is not there to help them and that they should learn about Iowa's car accident laws.  Finally, there is a book about car accidents in Iowa that you can review in the comfort of your own home with no pressure.  We have offices in Des Moines and Newton but represent Iowans injured in car accidents from throughout the state of Iowa.  For immediate assistance call 515-440-2852 and ask for Corey.

by Corey Walker
Connect with me
With over 25 years legal experience, Corey has been recognized for his work as an injury attorney.
Be the first to comment!
Post a Comment